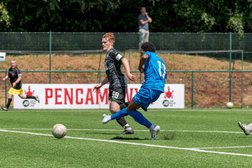 Good run out for the blues in first preseason friendly

Warrington Rylands started their 2022/23 campaign with a 2-3 loss at Welsh League Champions TNS.

The Blues with a mixed team containing established players from last season, new signings and trialists blew away a few cobwebs and got some miles in their legs in a good work out against good quality opposition.

Goalkeeper Will Appleyard was called into action in the 6th minute to pull off a good save from a shot from outside the area, but could not prevent TNS’s Josh Beamond from opening the scoring in the 9th minute. Cutting in field from the right, the No.58 curled a left footed shot into the top corner of the net.

The lead lasted just two minutes as one of our trialists slid the ball through the Welsh sides defence for Kane Drummond to slot the ball past the advancing TNS goalkeeper Dan Atherton, signed from Warrington Town the previous evening.

Atherton pulled off a good save in the 20th minute to deny Drummond as play in an even first half switched from end to end without either side looking likely to add to their tally.

Rylands took the lead just two minutes into the second half, Declan Walker bundling the ball home from close range following a scramble in the box from a corner.

Just as in the first half the scores were leveled two minutes later as Chris Marriott’s powerful strike from outside the area went in off the far post.

The New Saints of Oswestry Town & Llansantffraid Football Club (to give them their full title), playing their 4th pre-season game ahead of their Champions League campaign started to take control of the game, the second half of which was played mainly in the Rylands half.

The home side struck the decisive goal in the 71st minute when substitute Owen Davies scored from close range with his first touch just a minute after being introduced.

Rylands went close to snatching an equalizer in the closing minutes with Steve Irwin heading a corner onto the bar and a trialist stabbing a shot inches wide.